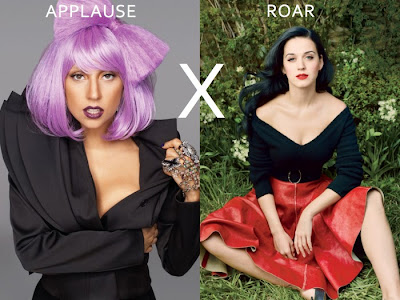 It is always fun when there is a 'pop battle' between fans of two singer. At the moment it's fans of Mother Monster, Lady Gaga versus fans of Katy Perry. And all the hoo-ha?  Both multi-million-selling artists have released new singles, Perry with ‘Roar’, and Gaga with ‘Applause’, and now we have  overly invested teenagers screaming at each other via the medium of Twitter. One fan wrote, "we can understand why Katy is #1 on itunes, this is﻿ real music unlike floppause," while another commented on Lady Gaga, "this sounds like if Poker Face and Alejandro haved a baby!!!! I LOVE IT. FINALLY THAT GAGA OF THE FAME﻿ MONSTER AND THE FAME IS BACK!!!!!!♥ love this song! The Irishtimes.com gave an early verdict in the hotly contested 'pop battle', by saying, "Gaga’s new track is detached and cold, Perry’s is emotional and air-punching. Both are as cynical as the other, of course, but which is better? Hands down, Perry’s." They continue, "Gaga opens the song blustering and shouting, like a misguided opera interlude in a Eurovision performance that sees the audience stare around uncomfortably while a robust woman dressed in leather shakes her first at the arena. Meanwhile, Perry’s anthem is the soundtrack to daydreams about rescuing people from hostage situations while still looking hot / winning Wimbledon even though your knee gave way in the final set but you STRUGGLED ON." Celebuzz reported, The last time Lady Gaga released a lead-off single ("Born This Way"), everyone got mad because it sounded a lot like Madonna's "Express Yourself" (allegedly). This one doesn't sound anything like Madonna (which is good, considering what she's been putting out lately, but it also doesn't sound much like anything at all, really." For Katy, they said, "Oh, a simple pop-friendly beat! Awesome. But, agh, these lyrics. "I'm floating like a butterfly / Stinging like a bee, I earn my stripes." Some are saying the song is actually just a rip-off version of Sara Bareillis' "Brave" (which, now that I know what that is, sounds fair); I say it sounds more like a good chunk of the songs Katy Perry has produced over the last few years. Which is disappointing for two reasons: 1.) it's a little lazy; and 2.) that means "Roar" is probably going to be #1 on the charts for the next 10 weeks." So what do you think? Are either of these songs legitimately good? Let us know your thoughts...
Katy Perry Lady Gaga