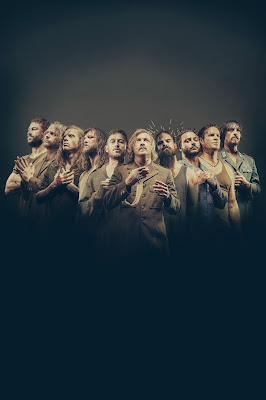 South Africa - get read for history in the making for South Africa's first 'super group', Blood Brothers! Sony Max (DStv Channel 128) is the official media partner for the not-to-be-missed once-off concert Blood Brothers  – taking place on Saturday, 18 July at Carnival City – which sees history in the making as 10 South African musical legends get together to form the country’s first ever super group. In true super group style, each band member has been especially picked from a premiere crop of local rock legends. Together on one stage for one performance, they will perform three hours of the major hits that made them famous as well as songs from international bands that have influenced their sound. They are Arno Carstens (Springbok Nude Girls), Albert Frost (Blue Boers/Arno Carstens), Francois van Coke (Fokofpolisiekar), George van der Spuy (Taxi Violence/Good Night Wembley) and Kobus de Kock (Black Cat Bones) on vocals with Hunter Kennedy (Fokofpolisiekar/aKING/Die Heuwels Fantasties) and Rian Zietsman (Taxi Violence/Beast) on guitars; Loedi van Reenen (Taxi Violence) on bass and guitars and Jason Hinch (Black Cat Bones) and Isaac Klawinsky (Shadowclub) on drums. Never before have so many local legends agreed to partake in a venture of this magnitude for a good cause. Forty percent of the proceeds go to the charity initiative the Vrede Foundation which raises both funds and awareness in the fight against cancer, especially amongst young people. Says Sonja Underwood, Territory Director for Sony MAX: “Sony Max is delighted to be the official media sponsor for this cutting edge concert, as it not only talks to our audience but also reflects the channel aspirations.  Not only will Blood Brothers ensure an unforgettable rock legacy but it is a powerful platform to help in the ongoing battle against cancer.” Added Francois van Coke “ It’s really cool that Sony Max is partnering on this amazing show.  I’m a fan of the channel and just got to love it even more.” The Blood Brothers concert is produced by Vredevest to generate awareness amongst young South Africans aged 15-29 regarding cancer and to raise funds and provide financial aid to young South Africans with cancer who do not have medical aid.
Albert Frost Arno Carstens Blood Brothers DStv Francois van Coke George van der Spuy Hunter Kennedy Kobus de Kock Sony Max