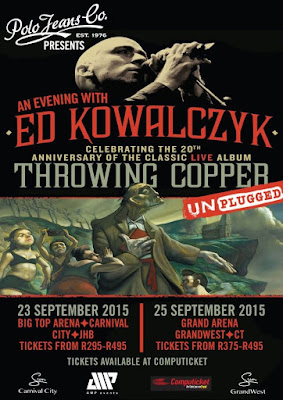 Ed Kowalczyk the legendary songwriter and former lead singer of the multi-platinum rock band, Live, announces the South African leg of his Throwing Copper Unplugged 20th Anniversary Tour. Stripped back, intimate and disarming. Ed Kowalczyk will appear onstage with a new unplugged production of some of rock’s most profound anthems and the voice that has attracted legions of fans for more than two decades. Kowalczyk has built one of rock’s most impressive resumes. His band, Live, became one of the most successful and enduring alternative bands of the last twenty years, with more than 20 million albums sold worldwide. Among this catalogue are some of alternative rock’s most iconic hits, including “Lightning Crashes”, “I Alone”, “Selling the Drama”, “The Dolphin’s Cry”, “Overcome” and “Heaven” many of which have been responsible for shaping the musical landscape for alternative rock around the globe. In 2010, Kowalczyk released his first solo album Alive which spawned the hit single “Grace”, which was followed in 2013 by The Flood and Thee Mercy which featured the hit song, “Seven”. For his newest creative offering, the Throwing Copper Unplugged 20th Anniversary Tour Kowalczyk returns to South Africa to perform a breathtaking acoustic set that celebrates the 20th anniversary of this seminal Live album, playing it in its entirety, along with a handful of other Live hits and surprises. “I’m so excited to celebrate the 20th anniversary of Throwing Copper in this new unplugged production” Ed says. “Fans can expect to see and hear me like never before! “An Evening with Ed Kowalczyk - Throwing Copper Unplugged 20th Anniversary Tour”  is proudly presented by POLO Jeans Co. in association with AMP Events. Tickets on sale at Computicket from 09h00 on Friday 12th June 2015. For complete tour and ticketing details, visit www.computicket.com