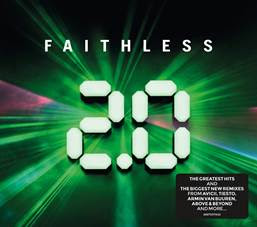 Faithless - the band who redefined the dynamics of contemporary dance music celebrate a landmark 20 years with a brand new release. With seven trailblazing albums and countless top 10 singles to their name, in excess of 15 million records sold worldwide and having performed to millions across the globe, 2015 marks the 20-year milestone in the illustrious career of Faithless - a band widely regarded as the UK’s most influential dance act of all time. To celebrate, band members Maxi Jazz, Sister Bliss and Rollo have curated a special new album, ‘Faithless 2.0’. Comprised of 28 tracks split across two CDs, the first containing the remixes and the second detailing Faithless’ most iconic tracks of the past 20 years, it joins the dots between the past, present and future of dance music through the eyes of the band themselves. In a summer that’s already seen the band headline BBC Radio 1’s 20th anniversary celebrations in Ibiza and announce their first run of UK tour dates for over four years (selling out their gig at Alexandra Palace in less than an hour in the process), ‘Faithless 2.0’ certainly feels like a fitting way to draw their 20th year to a close. Calling on some of the world’s most influential electronic music artists to remix their catalogue - both those they’ve inspired and been inspired by throughout their remarkable career - ‘Faithless 2.0’ delivers as a very special record. Enlisting Avicii, Tiesto, Above and Beyond, Booka Shade, Claptone, High Contrast, Eric Prydz, Purple Disco Machine and Armin Van Buuren to provide their own takes on seminal material, the album celebrates the band’s longstanding and continued influence on dance music. Stand out tracks on CD1 include Avicii’s take on arguably the most recognisable dance record of all time, Faithless’ 1995 classic ‘Insomnia’ and Tiesto’s storming electro-house rework of 'God is a DJ’. There is also space for emerging talent too, with producers-on-the-rise Autograf turning their hands to ‘Drifting Away’ and British band Until The Ribbon Breaks providing a beautifully heartfelt, atmospheric twist to ‘Don’t Leave’. Bringing 20 years of history and memories firmly back to life meanwhile, CD2 documents  14 of Faithless’ career-defining records, with tracks like ‘Insomnia’, 2004 anthem ‘Mass Destruction’, ‘We Come 1’ and ‘Salva Mea’ all included on the track list - a firm nod to to the timeless nature of their music.
Above and Beyond Armin Van Buuren Avicii Booka Shade Claptone Eric Prydz Faithless High Contrast Purple Disco Machine Tiesto