Scott Stapp – The Voice of Creed – To Rock SA In December 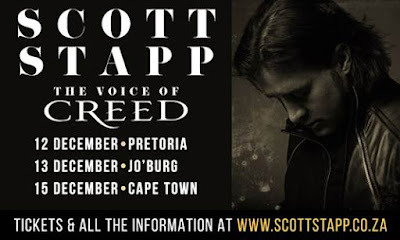 Scott Stapp, front-man of legendary Rock band Creed, heads to South Africa for the first time this December and will perform live in Pretoria, Johannesburg and Cape Town. Scott Stapp co-founded and fronted Creed, achieving great commercial success in the late 90’s with singles such as With Arms Wide Open, My Sacrifice, One Last Breath and Higher. Creed released three consecutive multi-platinum albums, of which ‘Human Clay’ has been certified diamond, collectively selling over 53 million albums worldwide and becoming the ninth best-selling artist of the 2000s. In 2001 With Arms Wide Open also won Creed a Grammy Award for Best Rock Song. Stapp pursued his solo career after Creed went on break in 2004 and released two solo albums with his debut The Great Divide (2005) and the most recent release Proof of Life (2013). His first tour to SA will see Stapp with full band performing all of the hits and fan favourites from Creed along with his solo material, and promises an incredible night for fans.

Confirmed Dates for Scott Stapp – The Voice of Creed – Live In SA, are:

Tickets sales have opened and are limited for each venue, so be sure to purchase tickets before they sell out to avoid disappointment. Tickets are available online from http://breakout.nutickets.co.za/
Creed Scott Stapp