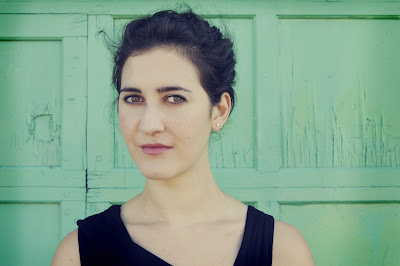 Nicky Schrire is an inventive and versatile vocalist and composer. She has performed in New York, Los Angeles, Boston, London, Dublin and South Africa with musicians ranging from Sibongile Khumalo and Arno Carstens, to Grammy-nominated pianists Gerald Clayton and Gil Goldstein. Born in London, raised in South Africa, five years in New York, and now returned to her birthplace, Nicky Schrire has created a highly personal travelogue with her new 5-track EP “An Education.” Touring North America, South Africa, the UK and Ireland as a jazz musician, she realised that her creative focus was shifting towards the folk tradition of telling stories, rather than compositions overflowing with jazz complexities. Encouraged by US critics comparing her to Joni Mitchell, Joan Baez and Mary Chapin Carpenter, she bought a guitar, left New York and spent two months in Cape Town writing new songs and teaching herself how to play. She focused on weaving her nomadic experiences into her music. Schrire explains: “I`ve moved home several times, but leaving New York was such a liberating change that the process of writing and recording this EP ended up feeling necessary – and cathartic.” Schrire arranged all the songs for ‘An Education’ to be played with ’cellist and childhood friend Ariella Caira; then helmed the one-day recording session at Cape Town’s Digital Forest Studio. The result is a stunning collection of songs infused with a feeling of real acoustic clarity. In July 2015 Schrire introduced the new EP to audiences in Birmingham at Cherry Red's as well as at the famed Green Note in Camden, London. “Things have been so busy that I have not had time to properly launch the EP in South Africa. The Café Roux performance will showcase the new songs, so it will be our intimate, Cape Town EP launch.” One of Schrire and Ariella Caira`s exciting recent projects was the re-imaging of Tresor`s single “Never Let Me Go” for 8 Cellos and 8 Voices in Split-Screen. They recorded their individual parts, overdubbing as the ensemble grew from one guitar, one voice, and one cello, to seventeen instruments at the song’s highpoint. It was an ambitious undertaking but the end result is a beautifully realised video and an inventively re-imagined version of the song. Tresor said of the finished product, “I love the feel Nicky and her team gave “Never Let Me Go”...with the beautiful mix of cellos and smooth voices, they created an exquisite rendition of the song.”
Arno Carstens Nicky Schrire Sibongile Khumalo