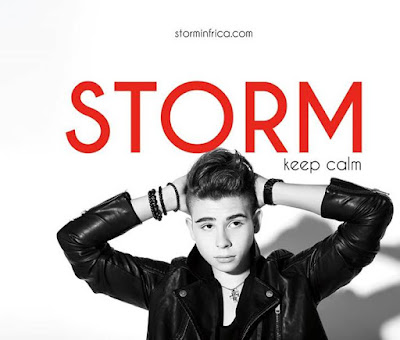 South Africa’s newest singing sensation, Storm, has just announced his debut single ‘Keep Calm’. The dynamic 16-year-old singer has been hard at work over the past few months recording his EP, which is due out early next year, and has officially released the first taste of the upcoming record – a track called ‘Keep Calm’. At just 16 years of age, Storm has already uncovered his love for music and explored this passion from a very early age. Performing on the same stage as some of South Africa’s biggest stars such as Locnville, Euphonik and Blackbyrd has prepared him for this moment – and it’s one he has been working on for over a year. The song is a beautiful blend of funk, pop and deep house which, not only makes the song incredibly unique, but it also has a crossover appeal which is bound to satisfy both Top 40 and urban fans around the country. “The song means a lot to me,” Storm says. “I love the sound we created on this song. It’s got such a great energy to it and I love the way we managed to give an old-school funk sound, which I love, with a pop twist.” The single has just been serviced to radio stations around the country and Storm, a student at COPA (Campus of Performing Artists), is ready to take on the local music industry. “My team and I have always believed in the fact that young artists in South Africa are capable of meeting the standard that top local and international artist set,” he says. “I’m so excited that the song is playing on radio stations around the country and I’m glad the response has been so positive. This is only the beginning.” With his charming good looks, crisp vocals and catchy music, Storm is ready to bring his own flavour into the local market. The new single has just hit radio stations around the country and is now available to download off iTunes.
Keep Calm Storm