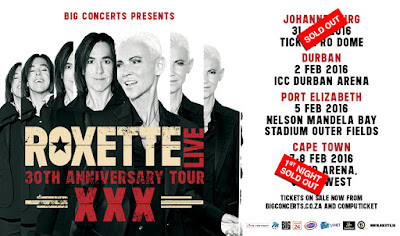 I was in Grade 11 when I heard Roxette for the first time. I was visiting a friend and he bought this cassette of a group called Roxette which had a heavy radio rotating song, The Look. I actually enjoyed the remix of the song more than the single. I was more into Depeche Mode and those electro music than pop rock, but something about Marie Fredriksson's voice  made me want to hear more. Then I saw the video for Listen To Your Heart (see below). I was hooked. It was the most beautiful song I've heard since Depeche Mode's Question Of Lust. I thought they were going to be a one-hit-wonder band. I was so wrong. It's 30 years later and the petite Marie and band mate Per Gessle are still going strong. Their music has matured. Their audience have changed, but they always got it right to hold on to their original followers and gained new ones. They were already a world phenomenon when they touched down in South Africa in 1995 for their first ever tour of the country and were greeted by 130 00 crazy fans. And they have returned to South Africa over and over again. Even with Marie's health scare and everyone wondered if the band will still continue, they did. They pushed on. Yes, Marie looks frail on stage, well, the last time I saw them live, and her voice is not quite what it used to be, but she fights on. Sing on and entertain us. I don't think there will be ever stopping them. Maybe one day they'll pull an ABBA move an disband never to reunited, but I think they will carry their music torch until the day it dies. I love you Marie. I love you Per. Can't wait to see you on 7 February in Cape Town, South Africa. Thank you that the unknown American exchange student in Sweden who bought a copy of Get Sharp and took it to America where the seed of the band’s international success were planted. And finally, thank you M-Net and all the other sponsors for bringing them back to their legion of fans here.