EXCLUSIVE! We talk to the Blue Man Group 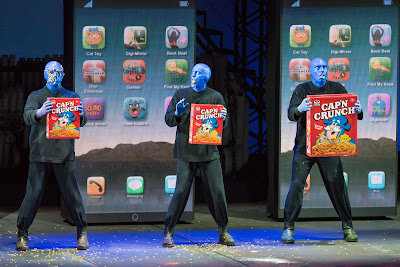 They are blue, they make fantastic music and make you wanna get up and dance. They are the Blue Man Group and we had a chance to speak to one of the guys from Blue Man Group, Anthony.

When and where was the Blue Man Group started?
The Blue Man Group was formed by three friends in New York City in 1989. The concept was so successful that they were able to open their first show in Astor Place in 1991.

What inspired you to create the Blue Man Group?
The creators of the Blue Man Group wanted to create a show that they would want to see.  They wanted to make an immersive experience for theater goers of all ages, creeds, and cultures.  The show does just that.  It allows audience members to meet the Blue Men and see a world unlike anything they have ever experienced before.

You guys play very interesting instruments in your shows. How do you go about choosing what instrument to use?
Since this show is so different, the music and instruments have to be as well.  Blue Man Group is well known for drumming but we also have some wonderfully strange instruments.  Some of the best Blue Man music is made using plastic PVC tubing.  We cut the tubes to different lengths and love the unique tonal qualities.  It is a very good example of the show, the Blue Men like to take something ordinary from our world and elevate it to something wonderful.

What has been the most bizarre instrument you ever had to play on stage?
The most bizarre instrument I play is without a doubt the Electric Zither.  It is a basically a plank of wood with almost 100 strings stretched across!  The instrument is played with finger picks, glass slides, and old tape measures.  It is capable of very high energy rock sounds as well as ambient and eerie atmospheric sounds that add wonderful dimension and tension to the Blue Man soundscape. 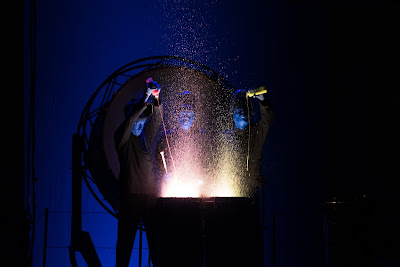 How do you choose the music for the show?
Music for the show is written a few different ways.  We have a “lab” in New York City in which new ideas and songs are constantly being generated.  We also have a strong history of oral tradition among the performers.  Sometimes choices and experiments made in a particular show can be passed on to other performers and become part of the show every night!

Do you create your own music besides playing other peoples music?
The music of the Blue Man Group is completely original and unlike anything else you will find. We do have a section of the show in which the Blue Men play some local favorites for the audience!