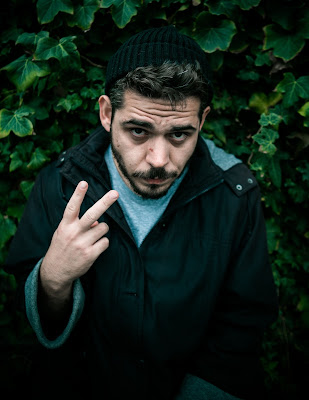 Disco quit his job in advertising to become a full-time rapper. He started a record company called Megacorp and has been recording his debut rap album Spellz.

How did the track Kill Disco come about?

"Narch sent me the beat and I said, fuck yeah, let's make a song. We called it Kill Disco because it was meant to be the last Disco Izrael song ever," says Disco.

As for the lyrics, those followed naturally. "There's no rapper like Disco," says Narch. "His execution is on point; his lyrics are next level. I've worked with him for many years and this is by far his best work yet. We have chemistry, so making Kill Disco was simple. I just told him here's the beat, do what you do best."

Disco will be releasing a single track off the album, starting with Kill Disco, each day for thirteen days straight.

Once the initial release period is over, the full Spellz album will be available for download on all major music streaming sites including Soundcloud, Google Play, Spotify, iTunes and Tidal to name a few.

Disco and his management team Apollo Artists are currently planning the Spellz album launch tour, which will kick off in late July and run into August. The Spellz tour will include gigs at some of the best loved venues across the country.
Disco Izrael PHFAT