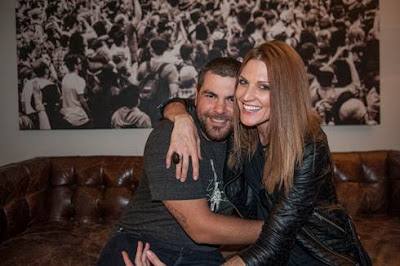 In one sentence from Dryden, Bonfire is summed up as “When wood burns, it stays its shape but it will never be as it once was … the shell is there but it’s gone somehow.”

As we get older, things change but there is always the ghost of the past that feels so young and tangible. A strong theme for a powerful track!

“Dryden was my date to the Grammy’s in 2014, we had an instant connection and have been great friends ever since our first label-introduced writing session.” Esjay continues, “We have written many songs together that have not been released, so when the South African tour was 100% locked in, we jumped on the opportunity to release our first proper collaboration. We wrote and recorded the song in the celebrity suite at the Hard Rock Hotel in Palm Springs, California, which was a magical and unforgettable experience – I always have to pinch myself when I realize that I am writing music and am friends with people we used to watch on MTV in South Africa!”

Esjay has had over a decade of success in the music Industry and during the first part she cemented herself as one of SA’s top female rock vocalists fronting Durban-based rock band, Stealing Love Jones. The band achieved mainstream success with singles “Kicks”, “A Little Easier”, “Out There” and “Limozeen”, and shared the stage with major international bands such as Fall Out Boy, Violent Femmes, Jimmy Eat World and Groove Armada.

After the success of Stealing Love Jones, Esjay made the move to Los Angeles in 2009 where she was discovered by Tom Maffei of Primary Wave Management and introduced to Zach Katz (BMG) and JR Rotem who signed her to a Publishing deal with Beluga Heights.

Esjay has been a part of compositions for Sean Kingston, Jeffree Star, Disney, Netflix, Fabletics, TimeFlies, Escape The Fate, Mystery Skulls with Nile Rodgers and brandy, Alien Ant Farm, Cara Frew and many other Top 40 artists. Esjay co-wrote and produced the Locnville single “Grapevine” feat Sabi which was the first single from the duo’s current album ‘Taste The Weekend’ and one of the biggest single releases in SA of 2016.

Esjay has received praise for some of the biggest names in the music industry.

In 2014, Esjay teamed up with Gina Schock of the Go Go’s and Trey Vittetoe who have penned songs for Selena Gomez, Miley Cyrus and many other influential artists. "Esjay Jones is so very talented that I could go on forever. She blows my mind every time we work together. Her voice, her songwriting, her production skills, the list goes on and on. She is the real deal!" comments Schock.

Grammy nominated mixing engineer, Ariel Chobaz, who has worked with the likes of Nicki Minaj, Justin Bieber and Drake, had great things to say about working with the talented Esjay. "Esjay lives and breathes music, it’s a part of her being and she brings that dedication to every project. She is an incredible producer and writer and I can't say enough about her!"

Esjay is currently working alongside actress Taryn Manning (Orange Is The New Black, 8 Mile, Hustle&Flow) on her new record. Manning launched her solo singing career in 2009 and is the vocalist for the electronic duo Boomkat.
Alien Ant Farm Esjay Jones