Bryan Ferry: Coming to Cape Town and Pretoria in 2019 as part of his Global Tour 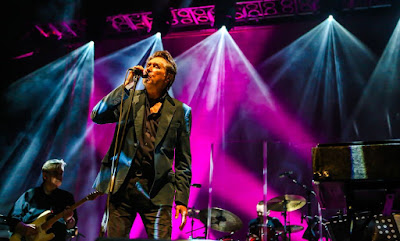 Since the release of his first record with Roxy Music in 1972, Bryan Ferry has been internationally acclaimed as one of the most innovative and stylish musicians, songwriters and singers to emerge in pop and rock music. Now he is coming to South Africa as part of his Global Tour in 2019:

Tickets go on sale Wednesday 5th September at 9am from bigconcerts.co.za and Computicket. Discovery Card holders get an exclusive 48 hour pre-sale from 9am on Monday 3rd September. Go to www.discovery.co.za for more information.

Presented by Bok Radio and Channel 24. Another Big Concerts Experience.

Widely regarded as the embodiment of the glamorous and romantic worlds evoked by his songs, Ferry is also lauded as an icon of sartorial and personal cool. A former student of Fine Art, and as involved in the visual aspects of his work as he is in the composition and performance of the music, Bryan Ferry has conceived and directed some of the most original, controversial and critically applauded album sleeve artwork of the last four decades.

Ferry came to prominence as the lead vocalist and principal songwriter with the glam art rock band Roxy Music achieving three no. 1 albums and 10 singles which reached the top10 in the UK between 1972 and 1982. Their singles included “Virginia Plain, “Street Life”, Love is the Drug”, “ Dance Away”, “Angel Eyes”, “Over You”, “Oh Yeah”, “Jealous Guy”, “Avalon” and “More Than This.

Ferry began his solo career in 1973. His solo hits included “A Hard Rain’s a-Gonna Fall”, “Lets Stick Together” and “This Is Tomorrow”. Ferry’s best-selling album “Avalon” (1982) saw further release of singles such as “Slave to Love” and “Don’t Stop the Dance” followed by the UK no. 1 album “Boys and Girls” in 1985. When his sales as a solo artist and as a member of Roxy Music are combined, Ferry has sold over 30 million albums worldwide.

As an artist and musician, Bryan Ferry possesses the rare distinction of being regarded as both classic and timelessly contemporary – an accomplishment achieved by both his recordings with Roxy Music and the range and intensity of his solo albums.

This may be the last chance for South African fans to watch Bryan Ferry live performing all his hits live.
Bryan Ferry Roxy Music