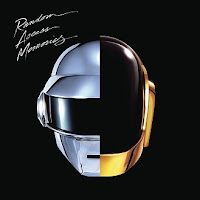 Don't believe the hype. Its success had little to do with the marketing campaign. Other than it motivated core fans! That's the story here. Kind of like when Apple introduces a new product. Daft Punk fans, earned over two decades, track the band incessantly, and when they heard a new record was imminent, they couldn't stop talking about it. They're the ones who made the SNL ad and the Coachella video go viral. Otherwise, the ads were dead in the water. I.e. nobody who didn't care before cared now, the ads didn't wake up the masses, the fans did! Not that every fan is happy with "Random Access Memories." Many are angry that it's a return to the seventies as opposed to a step forward into the electronic stratosphere. But one thing "Random Access Memories" has that most albums do not is a hit single. And a hit is not something that can be quantified, rather it's something you HEAR, that makes you feel warm and excited and energized and desirous of nothing so much as playing it again. The launch pad was primed, but it was "Get Lucky" that ensured blast-off. And now with streaming media, we live in a totally different era. The listening threshold is tiny. Used to be you had to wait to hear multiple tracks on the radio, distill public opinion, only fans bought without hearing first. But the buzz has caused immense streaming on Spotify.