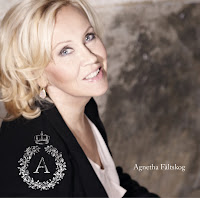 “Never thought that I’d ever sing again. But hearing the first three songs, I just couldn’t say no!” With these words, one of popular music’s most recognisable and celebrated names of the past 40 years – Agnetha Fältskog – signals her return to the spotlight. The siren songstress from ABBA is back with a new album “A”, preceded by a curtain-raising track, “When You Really Loved Someone." Agnetha has been working with renowned, Grammy-nominated songwriter/producer Jorgen Elofsson – who has been responsible for hits by Britney Spears, Kelly Clarkson, Celine Dion and Westlife, among others – and acclaimed producer/arranger Peter Nordahl on her brand new album. “She wanted to make music again,” says Elofsson, “We could feel that. She had been thinking about it. Basically, she’s a musician, a songwriter/singer who hasn’t done that for a while. We saw her open up, become much happier, with music again in her life.” “A” features one of Agnetha first co-writes in many years: “I hadn’t written any music for a long, long time,” she says. “But I sat at the piano, and suddenly it was there.” The most anticipated new album of 2013, “A” was recorded and produced by Jörgen Elofsson and Peter Nordahl: “We wanted to make this as if Agnetha hadn’t entered ABBA,” says Elofsson. “We were interested in what she sounded like if she hadn’t been in the group. And yet it’s important that she comes across as we remember her to be.”
ABBA Agnetha Faltskog