One Direction's 'Best Song Ever' 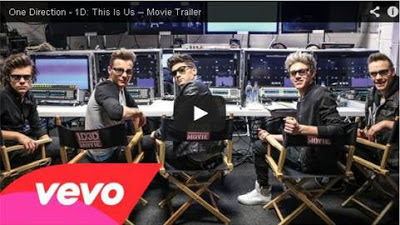 Global superstars One Direction will tease their forthcoming first movie, the 3D ‘This Is Us’, with the eagerly awaited release of their brand new single ‘Best Song Ever.’ The first song to be taken from their forthcoming third album due for release later this year. On ‘Best Song Ever’ Niall, Louis, Harry, Liam and Zayn deliver yet another memorable modern-pop classic. Fans can get their first taste of ‘Best Song Ever’ when the new trailer for ‘This Is Us’ launched on their official Vevo channel. With a sky scraping sing along chorus, One Direction’s new single expands their sound yet remains as irrepressibly infectious as ever. One Direction are currently on a worldwide tour in support of their second album ‘Take Me Home’, while ‘This Is Us’ will be released in August. The band also have just announced the first two legs of a worldwide stadium tour for 2014 – including eight sold out dates in the UK and Ireland. With their two albums to date – ‘Up All Night’ and ‘Take Me Home’ - One Direction have sold over 30 million records worldwide. They’ve won two BRIT awards, three MTV Europe Music awards, three Billboard Music awards and this year achieved their third UK number one with the official Red Nose Day 2013 single ‘One Way Or Another (Teenage Kicks).’ Watch the trailer of their movie, HERE!
One Direction Sony Music