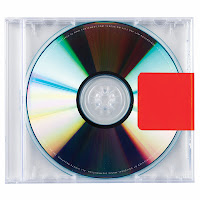 Everyone professionally involved with the creation of Kanye West's sixth solo effort was sworn to secrecy, and with no preorders allowed, plus the news that producer Rick Rubin was still tinkering with tracks seven days prior to the drop, this instant, no-singles, anti-hype album got pre-release hyped on an Olympic scale. Think of the roll-up as a revolutionary blow against the empire or the supernova ego of West in full effect, and while it's probably a little of both, Yeezus the album is a lot of both, with good taste and bad taste both turned up to 11. This agro-industrial earthquake with booming bass and minimal synths balances ground-breaking hip-hop lyrics ("New Slaves" is a bizarre, layered concept clash where high fashion, slavery, and "I'd rather be a dick than a swallower" all collide) with punkish, irresponsible blast-femy (during the draggy, trap track "I'm in It," West's melodious and melancholy voice shouts its dreams to the multitude, pleading "Your titties, let 'em out, free at last/Thank God almighty, they free at last" as if civil rights and booty calls were equally noble quests), and it all works in an astonishing, compelling manner. It's as if West spent the last year listening exclusively to Death Grips and Chief Keef and all the political, social, and musical contradictions became his muse, inspiring moments like the Keef and Bon Iver meet-up that fuels the mile-high hangover number "Hold My Liquor.
Kanye West