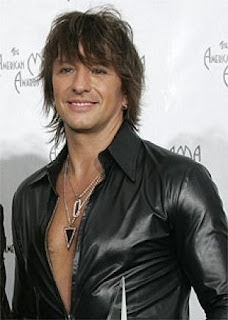 Richie Sambora seems to be pointing both barrels directly at Jon Bon Jovi in his brand new solo track, Come Back As Me, reports music-news.com. The song features the lyrics, 'What do you want me to say, I'll tell you anything you wanna know. You want to know about disappointment, baby I haven't watched that show' and 'What do you want me to say, I gave it everything I could give But everything just wasn't enough so I just let live and let live'. While the lyrics could be interpreted a couple of different ways, it sure sounds like it might be a dig at his temporarily former group Bon Jovi, especially considering that he recently tweeted 'figured I'd lay something new on ya. And the lyric is pretty timely..' Richie seems comfortable with his life despite Bon Jovi's suggestions that his former lead guitarist was having problems. 'In spite of it all, in all that you see, if I die tomorrow, I'll come back as me  Not Elvis, or God not Frankie not Dean, if I die tomorrow I'll come back as me'. With rumours that Richie was just taking a break from Bon Jovi to work on some personal issues, the sudden appearance of this song doesn't suggest a reunion anytime in the short-term and certainly now makes Richie rejoining the band before the Australian tour highly unlikely. He also wasn’t part of Bon Jovi when they toured South Africa recently.
Bon Jovi Richie Sambora