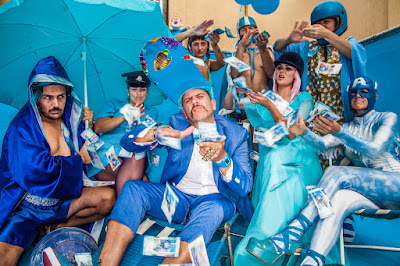 Jack Parow pressed the ‘refresh’ button in 2009 and kicked the music world in the pants with the release of his Cooler as Ekke hit single and music video. He breathed new life into a scene that thought that it had seen everything and he took no prisoners. Starting out by rapping for a burger and a beer over ten years ago, Jack Parow has come a long way. Since then he has released Platinum and Gold selling albums, toured the world, opened for Snoop Lion and Eminem, hung out with the guys from Top Gear, starred in a movie (Babalas), had the first Afrikaans Number 1 song (Hos Tokolosh with Gazelle) on 5FM’s Top 40, released his own comic book and has done a thousand other cool things. Parow’s music video, Cooler as Ekke, hit over 3 million views today, which makes it the most watched Afrikaans music video on YouTube, based on some homework. “COOLER AS EKKE JUST HIT 3 MILLION ON THE YOUTUBES!! Most watched AFRIKAANS video in HISTORY!! You guys are so fkn cool man… Really… Dankie for all the love. You guys are next-level!!”, says Jack Parow. He didn’t get ahead by sitting on his behind. Next up, he will release a single in July sure to blow the toupees off omies heads, a vinyl version of his first album is due for release soon and yet another trip to Europe is on the cards. September sees the release of Jack Parow’s memoir, Die Ou met die Snor by die Bar, and his chommie from the States, Dirt Nasty, will join Parow for a South African tour.  They collaborated on the track, F*k F*kkity F*k, from his album Nag van die Lang Pette. Also coming up is the launch of Parow’s online store. More information will be released soon.