The Voice's Blaze Johnson in SA This October 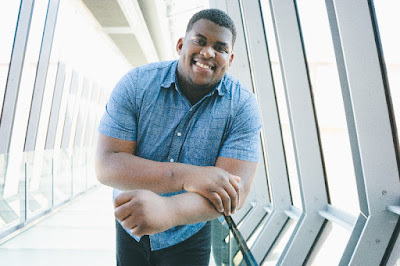 As final preparations for The International ARTS Talent Showcase is underway, organisers have confirmed the talented Blaze Johnson as the official opening act for the showcase, alongside usual suspect Nate Butler, A&R of America’s Got Talent. The Columbus singer was uprooted from the Bahamas at the age of eight when his parents moved to the United States to provide a better life for their son. Blaze played football in high school and was offered a scholarship, but he turned it down to pursue music. His mom told him that he was blessed with a special gift and needed to share it with the world. He auditioned for The Voice with The Fray’s "How to Save a Life,” which prompted Maroon 5 lead singer Adam Levine to turn around. Blaze was coached by Adam throughout the series before losing his knockout round match to Deanna Johnson. Blaze was originally discovered at The ARTS Convention in Orlando, Florida. He also starred in popular films When the Game Stands Tall and Underdogs. His skills include singing, piano, guitar, painting, drawing, football, track, and wrestling.

Nate Butler is an American songwriter, music producer, vocal producer, and recording artist based in Atlanta, Georgia. He has been a part of 45 million records sold worldwide. Butler has worked with multi-platinum artists such as Luther Vandross, Victoria Beckham, Backstreet Boys and more. He helped launch the careers of many artists, such as the American Idols and others such as, S Club 7, Blue and Sugababes. He has racked up credits on blockbuster films such as Barbershop, Four Brothers, Dr.Dolittle 2, Save the Last Dance, and the Nickelodeon hit Jimmy Neutron.

The International Arts Talent showcase takes place at The Grand Ballroom at Silverstar Casino.
Tickets are R550 per person and include the formal event and a three course meal.
For tickets, e-mail Admissions Director Elouise at itsartsafrica@gmail.com
Singers and actors perform on 2 October and models and dancers on 3 October.
American Idols Blaze Johnson Blue Nate Butler S Club 7 Sugababes