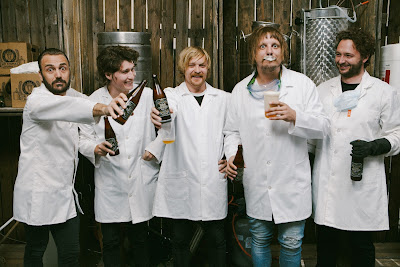 One year ago, FOKOFPOLISIEKAR initiated the launch of their 4 part Craft beer series produced by Sir Thomas Brewery. The beers in this range were all named after some the band’s most popular songs and became instant hits.  Dagdronk, Antibiotika, Hemel op die Platteland and Skyn Heilig have now been sold out and will no longer be produced. But this is not the end of Fokofpolisiekar and good beer. The band has taken everything that it has learnt in the past year to produce an exceptional Lager brewed by the renowned Devil’s Peak Breweries in Cape Town. The appropriately titled ‘Fokof Lager’ is mass produced and will be sold on tap at various bars and restaurants throughout South Africa. The very first drop will be poured at Capital Craft in Pretoria.  The perfect antidote to the heatwave.

Mouthfeel: Light in body.  Medium to high carbonation level with a full flavoured mouthfeel as a result of the 100% malt used.