EXCLUSIVE! We talk to Toya Delazy about her new sound, her tour and what's next for her 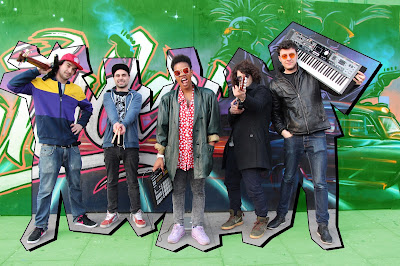 You've been touring a lot the last couple of months across Africa and even Europe. What has this tour meant to you?
It's been inspirational to finally fulfill my dream and tour Africa and Europe. I met my band, The Warriors, in London and we’ve been working so hard to create the show, that finally bringing them with me to Africa, and having the show so well received, has truly inspired me.

You talk on your Facebook page of your new international level. Can you tell us what you mean by that?
My show is of a global standard sporting musical maestros from different parts of Europe. My lead guitarist, Mirko Piconese, is from Italy along with Ivan Panella, my drummer. Daniel Bowery, my head bassist, is an Englishman and Trevino Issacs, my pianist, is Capetonian. So, we are a diverse, international team and the standard of the show is second to none.  The sound is a mix of Jazz, Electro, Hip-hop and Punk, with heavy bass.

What's it been like performing with a live band (appose to no backtrack and backup) and what does this bring to your sound and energy in the shows?
The show is bigger and I can take the music wherever I want. I'm not restricted to follow a backtrack and try imitate a CD. When performing live, the energy is insane. It's powerful and you can feel it and move with it. The energy is different for each show and it’s constantly moving and changing. The sincerity is felt in every note, the team is united bringing you one hell of show. People often say that when I record in studio, each and every one of my takes are different and unique and it's the same live. I’ve learned a lot as I’ve performed, and I’ve adapted my show as I’ve developed. I’ve continued to work on my show and improve.

What do you think was the biggest misconception people had about you when you started out?
That I was doing pop music. I didn't do pop music, it became pop music. As a result, everyone expected pop music...

Looking back from your beginning to now, what has been the biggest obstacles for you?
Probably not being able to see my family as often as I'd like to, especially with all the travelling...

How would you describe your new sound to fans?
I'd say come to the show and see, because trying to imagine a fusion of jazz, electronic, hip-hop and punk is probably a bit tricky - lol

What can you tell us about your new album dropping next year?
It's been 2 years in the making, and I've produced most of the tracks myself. It’s the most personal album I've done so far. I’m really excited to share it with everyone.

You are going to work with the UK band Example - super cool - how did this came about and what do you think this will bring to your music?
The collab is still in the pipeline, nothing has been formalised as yet. We met at the Nando's Music Exchange, and had a great time there. We both work and travel a lot, so we're just waiting to both be in London to hit it off in the studio.

Back to travel. The five things you always pack when traveling are...
Socks
IPhone charger
Mini-keyboard
Bluetooth speaker
Passport

What do you miss the most when you're not home?
The food!!! My granny's homemade chips - you can't beat that!!

What was the first record/CD you ever bought?
It actually was a story book of Alice in Wonderland!

And who is your guilty pleasure CD/artist your friends don't know about?
The Requiem, classical music, anything by Bach