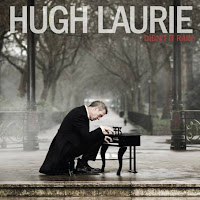 After the huge success of his debut album ‘Let Them Talk’ on which he celebrated and revived classic material from the world of NOLA blues, Hugh Laurie has released his second album ‘Didn’t It Rain’. The new CD sees Hugh Laurie depart the sounds of New Orleans as he follows the trajectory of the blues upstream and into the American heartland. It includes songs dating back to early pioneers W.C. Handy (‘St Louis. Blues’) and Jelly Roll Morton (‘I Hate A Man Like You’) to more recent artists such as Dr. John (‘Wild Honey’) and Alan Price of The Animals (‘Changes’). “I have resolved to forge on, deeper into the forest of American music that has enchanted me since I was a small boy,” explains Laurie. “And the further I go, the more bewitched I become – both by the songs and by the people I have been lucky enough to play them with.”