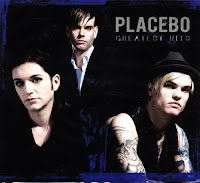 Once in a while, you discover something so unique on the internet, you can just shout it from the rooftops. Thus being the case with the fan made Placebo double CD, Greatest Hits. In many ways, it's much better than the official Placebo Best Of CD. The fan made Greatest Hits boast a staggering 42 hits by this alt rockers, even with some tunes that's as rare as you can imagine. Yes, the old hits are there as well, but it's the inclusion of their later stuff (For What It's Worth, Meds) and their brilliant cover version of Nik Kershaw's Wouldn't It Ge Good that got me excited. If I was the brains behind this brilliant compilation, I would have add their cover of 20th Century Boy and Daddy Cool, but even without these two tracks, this CD is an absolute download must.
Placebo