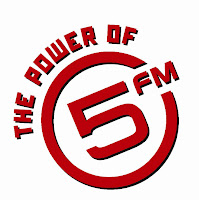 The number five is unquestionably South African radio station 5FM’s lucky number. The station has been nominated for an outstanding five Worldwide Radio Summit Awards. The prestigious awards and summit takes place from the 2 – 4 of May at the Roosevelt Hotel in Hollywood. The Worldwide Radio Summit is an essential event for anyone who has vested interests in radio; from breaking acts, record labels, publishers, station managers and talent agents across all platforms. Radio of course is also the worlds most powerful and influential platform to reach fans, sell music and influence local, national and global market places! 5FM is nominated by readers of the industry leader website, AllAccess.com the world’s largest online, news, music and information resource for radio worldwide. Members of the AllAccess.com community recognised 5FM as the music and entertainment authority, nominating the station in five categories out of a total of nine categories in the international section. Gareth Cliff, nominated for the Best International Radio Personality said “This is awesome for myself and for the station and I am absolutely thrilled. South Africa has the best listeners and they are so diverse and without them tuning in day after day, this nomination would not be possible. For this I thank them”.
5FM Gareth Cliff Hollywood SABC1 Worldwide Radio Summit Awards