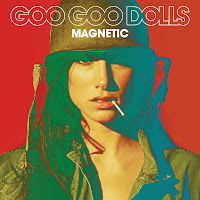 Magnetic is the tenth studio release for the Buffalo, NY trio, Goo Goo Dolls. "I'm so proud of our new album," says Rzeznik. I've had such a great time and learned so much from the amazingly talented people who worked on it with me." He continues, "I think that positive energy comes across on the songs. Writing and recording Magnetic changed my thinking about making music and doing it in a fun way." Goo Goo Dolls have sold over 10 million albums worldwide, with 14 Top 10 Radio hits, more than any other artist in the history of the Hot AC format. They are the only artist to have three songs on Billboard’s “Top 100 Songs from 1992-2012" including the Number One slot, for “Iris.” John Rzeznik has been honored with the Songwriters Hall of Fame Hal David Starlight Award and they have shared the stage with everyone from The Rolling Stones to Taylor Swift, who recently covered "Iris" with Rzeznik onstage. Most recently Goo Goo Dolls honoured President Barack Obama with a headlining slot at The Creative Coalition’s Inaugural Ball, which took place yesterday in Washington, DC. This CD is an absolute pleasure to listen to and a definite must for your CD collection.
Goo Goo Dolls