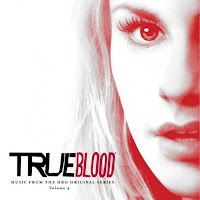 True Blood fans, it's time to suck the living daylight out of this hot CD release. History suggests that vampires and pop go together like fanged teeth and pasty faces. Before Bauhaus was moaning about “Bela Lugosi’s Dead” in the 80s, Screamin’ Jay Hawkins eerily rose of a coffin on stage in the mid-50s to put a spell on you. More recently the Twilight series and its accompanying albums put a fresh splatter on the genre, adding substantial bucks into their blood bank along the way. Since this is volume four from the ongoing HBO series—released not coincidentally before season five’s premiere– it’s clear there is more money to be sucked out of the concept. Thankfully, this set is as artfully and intelligently constructed as the previous three even if it follows the same basic blueprint. This instalment includes songs from the show's 5th and 6th seasons and features songs from Eric Burdon & Jenny Lewis, Iggy Pop & Bethany Cosentino, The Heavy, Howlin' Wolf, The Alabama Shakes, My Morning Jacket, Los Lobos, The Flaming Lips and many others.