Blake Shelton: Based On A True Story. . . 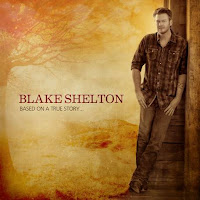 Blake Shelton is one of the "most versatile of contemporary country singers" (The New York Times). With seven consecutive No. 1 singles (twelve overall), Blake’s infectious multi-week No.1 hit, “Honey Bee" holds the record for the fastest-selling digital Platinum single for a male country solo artist. Black releases his highly anticipated new album “Based On A True Story”. The album features his current smash hit, “Sure Be Cool If You Did,” which hit No. 1 on Billboard’s Country Digital Tracks chart in its first week of release. “Sure Be Cool If You Did” has created a buzz, with Entertainment Weekly calling it “ludicrously catchy” with an A- rating and Newsday saying it shows “exactly how ‘The Voice’ coach-judge manages to maintain his country cred while wading into the mainstream.”
Blake Shelton