CD! In homage to the Mandela legacy - Viva Madiba! 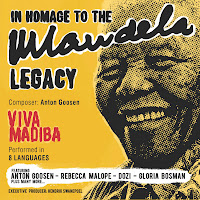 During 1992, Mr Nelson Rolihlahla Mandela president of the ANC, attended a dinner function in Pretoria at the home of businessman Hendrik Swanepoel. The renowned leader's presence plus a spontaneous performance of his famous “Madiba shuffle” made the occasion unforgettable for all present. Years later in 2006, Hendrik took his son Henry to meet Mr Mandela personally. Madiba said to Henry; “Henry my father's name was Henry” and wrote an inspirational message addressed to the young boy: “Dear Henry, We hope that you will grow and become an important leader in our country and beyond. Mandela” Hendrik was so moved by his communications with Nelson Mandela that he resolved to have a song of praise written about this icon. Anton Goosen, the well-known musician and friend, was commissioned in 2011 by Hendrik to write the music and the lyrics of the song “Viva Madiba.” Anton Goosen wrote and recorded the Afrikaans version at his home in Gansbaai and produced it over the internet with musicians as far apart as Clarence, Pretoria and Amsterdam. In order to honour this great statesman and perpetuate his memory, locally and internationally, Hendrik then decided to have the song translated into various national and foreign languages. The album features renowned South African artists including Anton Goosen (Afrikaans), Gloria Bosman (English), Rebecca Malope (Xhosa), Dozi (Zulu), Helena Hettema (French), Charlize Berg (English), Theo van Rensburg (Guitar), Manuel Escorcio (Portugese), Kathy Neuland (German) and Mammie Ntshauba (Tswana). Anton Goosen says, "the Ubuntu in Madiba that represents his sense of peace and forgiveness has always been an inspiration to me as a songwriter. Now, and even more so in the future, we must follow his example.”
Anton Goosen Nelson Mandela