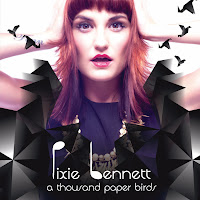 Most commonly known as the dynamite from SA Idols Season 5, Pixie Bennett has been in the music business professionally since 2001 as a singer, recording artist, club and freestyle vocalist, go-go dancer and MC. She has worked for DJs and Producers of chill house, electro, deep house, funky house, hard house, drum and bass and more! Invading the house music territory, Pixie Bennett has just released a new project, Thousand Paper Birds - an album that wholeheartedly encourages a listener to let loose on the dance floor. Like no other house release you have listened to thus far, the artist delivers a project with banging house tunes. Not only is the artist good in giving each song a special approach, the overall album is jam-packed with up-to-date tunes. One of South Africa’s top producers in the playground of electronic dance music Craig Massiv was in control of crafting and mixing the tunes on this release. The music connection that the artist and producer have had over the years helped seal a release that is undoubtedly going to get many people paying attention to Bennett’s music.
Idols SA Pixie Bennett SA Idols