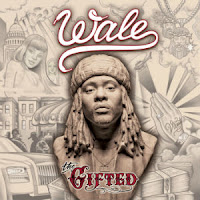 The Gifted is the third studio album by American rapper Wale. With singles like "Bad,” (first featuring Tiara Thomas and now remixed with worldwide sensation, Rihanna), rested at #1 on the U.S. charts for 7 consecutive weeks and is now certifiably gold, it’s easy to believe Wale when he says this is his best work to date. Tracks like “Clappers” featuring: Nicki Minaj and Juicy J and the soulful “LoveHate Thing” featuring soul singer and new comer Sam Dew have inspired both fans and critics alike to call Wale a “genius” for this latest offering.  Throughout his career, Wale has released a series of critically acclaimed mix tapes and received praise for his debut album, “Attention Deficit.” “Ambition,” Wale’s second album, was a chart-topper, reaching #1 on the Billboard Rap charts and presented the platinum selling, Grammy nominated hit record, “Lotus Flower Bomb.” With an artist as complex and multi-talented as Wale, it’s often difficult to capture their essence in just one interview. With this in mind, Atlantic Records has developed the first artist centric digital magazine. “The Beat of Atlantic,” is a web based publication that explores the inner workings of the talented Mr. Folarin and provides fans an inside view.
Nicki Minaj Rihanna The Gisted Wale