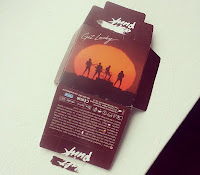 French electro dance outfit Daft Punk have teamed up with condom manufacturer Durex to release a brand of condoms, reports digital spy. The product is aptly named after the French duo's hit single 'Get Lucky' and the packaging features the artwork from the chart-topping track. As part of the publicity campaign for the condoms, Durex has sent free packs to well-known DJs. American DJ and producer Diplo posted a picture of the open branded packaging on his Facebook page on Monday (July 8), along with the caption: "Thank God I had those Daft Punk condoms last night." The condoms are said to be hitting shelves soon.
Daft Punk