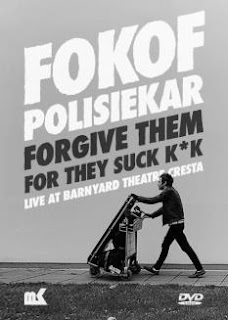 Fokofpolisiekar is famous for their explosive live performances and raw on-stage energy; the powerful conveyance of their intelligent, poetic and honest-to-the-bone lyrics. Their continued success and ever-growing popularity which transcends class, age and race, bears testimony to their artistic substance and social impact… and to being far more than just an outrageous name. In December 2012, in the run-up to Fokofpolisiekar’s 10-year anniversary, friends and fans attended the Barnyard Theatre in the Cresta Mall, Johannesburg, South Africa to bathe in the Spirit of Fokof. The recording of this performance was intended for live streaming on mktv.co.za.  Fokofpolisiekar and MK thought: “Let’s make it a DVD.” Forgive Them For They Suck K*k is a selection of the band’s most popular acoustic and rock musical offerings chronicling the past decade.Bassist Wynand Myburgh explains the obscure name for the DVD: "We do not take ourselves too seriously in Fokofpolisiekar. After being together for ten years we really enjoy each other’s company and performing together.  Unfortunately our individual schedules do not allow for rehearsals.  We always joke about how well the Fokofpolisiekar shows go although we are not the tightest live band around and we never rehearse. For us it is all about portraying and channeling the energy of our music while performing. We actually have a name for it: The Spirit Of Fokof.  It is a raw energy and connection that we have as great friends who have been playing together in band for a while. In 2009 a documentary about Fokofpolisiekar titled Forgive Them For They Do Not Know What They Do, was released by Fly On The Wall. I joked around that a follow-up DVD should be titled Forgive Them for They Suck K*k.  It stuck.  It is how the band’s name came about in 2003 - as a joke and it stuck. We do not proclaim that this is the best live show ever, but it does have the vibe. Forgive us and enjoy!!" The physical DVD will be on sale at the launch shows, thegreekmerchant.com and Kalahari.com from mid-August 2013. From September 2013 it will be available at your local music and DVD retailer.
Fokofpolisiekar