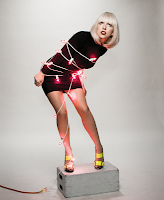 Oh dear, what is Lady GaGa up to? A publicity stunt? Digital Spy reports Lady GaGa has cleared any imagery from her Twitter profile ahead of the release of her third studio album. The singer is currently the most-followed female on the social networking site, but has decided to temporarily 'shut down' her profile ahead of a possible announcement. The page just sees the default egg image as her profile picture, while her background and header images have also been removed. The star's bio now reads: "This interface has been shut down temporarily. Please check back for updates." Lady GaGa has been working on her third collection ARTPOP over the past year and first teased an announcement of the project last September. However, after undergoing emergency hip surgery and cancelling the remainder of her 'Born This Way Ball' world tour earlier this year, the collection faced delays.
Lady Gaga