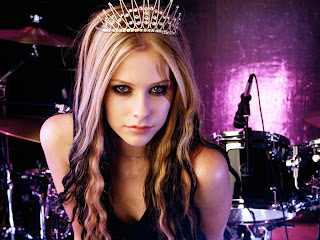 Rock chick Avril Lavigne has premiered her new single online. The singer will release 'Rock N Roll' as the second cut to be lifted from her forthcoming fifth studio album. Digital Spy reports that the track was produced by Max Martin (Britney Spears, Katy Perry) and co-written by Lavigne with her husband Chad Kroeger, Richard Goransson, David Hodges, Jacob Hindlin and Peter Svensson. 'Rock N Roll' serves as the follow-up to current single 'Here's To Never Growing Up', which has so far peaked at number 20 on the US Hot 100 chart. The star recently hinted at plans to release more than one new album, following her fifth collection in September. "I kinda wanna do the back-to-back records because I've worked so hard on writing a ton of songs and I just wanna make it perfect," she said. Listen to Rock N Roll, HERE!
Avril Lavigne Chad Kroeger