"No, no, no Mr Bieber"- Britney Spears gives advice

Britney Spears reportedly had to 'talk some sense' into Justin Bieber about his bad behaviour, reports music-news.com. Justin has been capturing negative headlines for several months and has most recently been accused of spitting in a DJ's face at a nightclub. Britney shot to international stardom when she released her album .Baby One More Time! in 1999 at the age of 18. She also had her fair share of negative press in the past, as the songstress was under public scrutiny when she visited rehab, divorced and experienced a mental breakdown in 2007. Apparently Justin's milieu have been really worried about him recently and asked Britney to impart her knowledge to the troubled teen. 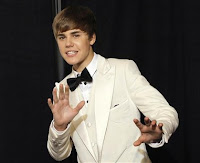 'Justin's team asked her to talk some sense into him,' a source told British newspaper The Sun. Britney remains under the conservatorship of her father, Jamie Spears, who is currently in control of the star's assets under its terms. It is said she made it clear to Justin during their conversation that it is easy to lose perspective with a hard partying lifestyle. 'Britney warned him of the slippery slope that can easily lead to rehab ' or even death ' among young pop stars,' the insider detailed. Britney's conservatorship order was enacted after she was placed on an involuntary psychiatric hold and stripped of visitation rights for her two sons with ex-husband Kevin Federline. She has since regained access to her children and has reportedly signed a multi-million dollar deal to perform a series of concerts in Las Vegas.
Britney Spears Justin Bieber