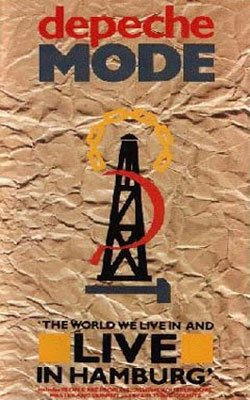 Electro synth pioneers Depeche Mode is known for their amazing shows. From the stage production, the visuals, the music and the fans. Me, being a HUGE Depeche Mode fan, went looking back at all the shows the band has ever done and came to the conclusion that their best ever show was Live in Hamburg, or as it's known in the music industry - The World We Live In and Live in Hamburg. This was also Depeche Mode's first ever legit first video release, featuring almost an entire concert from their 1984 Some Great Reward Tour, in Hamburg, Germany on 14 December 1984. Ok, I understand people won't agree with me (what about 101? Touring the Angel: Live in Milan? Tour of the Universe : Barcelona?), but I do have my reasons, and here they are. The Some Great Reward CD is probably regarded is the best of the DM releases in the early 80s. They were edgy, the sound was almost industrial like, they were regarded as leather-pervy guys who can turn sweet innocent catholic girls into leather wearing sluts, and the band they made good solid music. At that time Depeche Mode was not your general mainstream music like their other electro peers. They were regarded as underground electro synth pop and had a cult following. It was cool to be Depeche Mode fan then. They were on the rise and the music sucked you into their pervy lyrics and industrial sound. What set The World We Live In and Live in Hamburg apart from 101 and other aforementioned concerts is that they played songs then, that you don't hear now on their tour list. Yes, Photographic is still played, but then it was pure electro orgasm without the sample-loop sounds from the Black Celebration era, or mainstream poppy Violator or "we use live instruments" Devotional CD. Don't get me wrong, I LOVED those CDs and shows, but watching The World We Live In and Live in Hamburg just gave me goose bumps.
You don't get this concert on DVD. It's only available on VHS and it's pricy these days and a collector’s item. Songs like Leave In Silence, Lie To Me, Told You So and See You are hardly on their latest concert playlists. Also, and this is my favourite, is the inclusion of the B-side song Shout on this concert. It sounded better and clearer that the original version! The sound of this was amazing. Hearing how different, yet similar, the songs sounded live to their CD (or then vinyl) counterparts were mind blowing. How they adapted each song to fit in with the feel of that time in their musical meteoric rise to fame, hearing some glitches, and Dave Gahan grunting over the mic, makes this show the best Depeche Mode concert....EVER! Ok, now you can criticise me... Here is my FAVOURITE track from that concert, Shout. The track was the B-Side of their single, New Life.