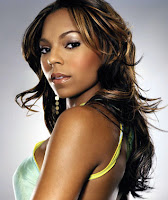 Grammy Award Winning singer/songwriter, actor and author, Ashanti can now be seen on the hit television drama Army Wives (Premiers weekly Wednesdays 20.30 on M-Net Series Showcase, DStv Channel 113). The show, now screening its 7th season, has introduced three new wives to the line-up with the highly acclaimed music diva sensation Ashanti playing the role of Latasha Montclair. Montclair is a fun loving mother of 3 that keeps her fellow Army Wives close to her heart and her family closer.Ashanti is most famous for her eponymous debut album, which featured the hit song "Foolish", and sold over 503,000 copies in its first week of release throughout the U.S. in April 2002.
Ashanti