CD REVIEW! Backstreet Boys - In a World Like This 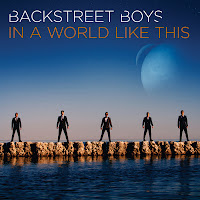 It's actually hard to refer to the Backstreet Boys as a boy band, because, and that is the truth, they are grown men, so they're in fact a man band. In a World Like This is the follow-up to 2009's This Is Us. It's the first album featuring all five original members in six years since Kevin Richardson left the group in 2006 to focus on his family and pursue other interests. He re-joined the group in 2012. It is also their first independent album after they left their old label Jive Records in 2010. But what about the sound, we hear you ask. Well it took Backstreet Boys a few albums’ worth of growing pains (and two albums as a foursome) for them to settle into an easy, well-worn pop groove. So long as they continue to channel that groove, they will have a future in the music world.  The man band gives us plenty of polished, tuneful-enough, mid-tempo adult contemporary pop songs featuring exclamations to both girls and the world about the glorious power of love. Not a bad release as all, at least Backstreet's back...alright.
Backstreet Boys