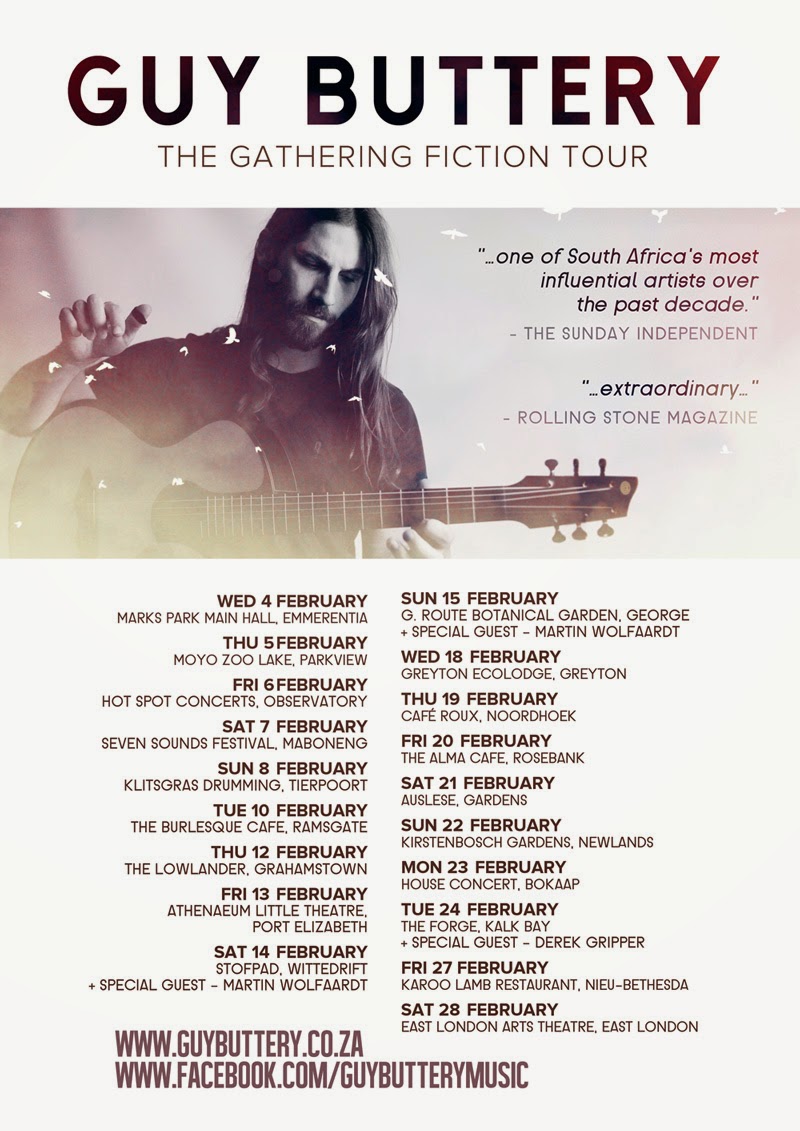 Four different continents, performances in more than twelve countries, and a second South African Music Award – that’s how one of South Africa’s hardest working musicians spent his 2014. Guy Buttery has propelled his career far beyond the borders of his beloved South Africa. As an internationally recognized musician, this multi-instrumentalist enjoys invitations to play sell-out performances all over the globe. The USA, UK, Australia, France, Brazil, and Italy have all welcomed him back year after year. However, to brand Guy Buttery as one of South Africa’s musical phenoms would be an injustice. He has grown into so much more. His international role has surpassed merely playing shows to foreign audiences. It has evolved into one as an ambassador of South African music, inspiring people across the world with our homegrown style at the very heart of his talent and tenacity. Guy Buttery is our musical advocate for everything positive and beautiful about the place we call home. It’s no wonder he becomes so excited when asked about his tours throughout South Africa. He loves the unique experiences on his musical journey through our land. And this year is no different. 2015 has begun with the announcement of the ‘Gathering Fiction Tour’, which includes stops in every major city in SA with almost 20 concerts. When asked about the title Gathering Fiction, Guy explains, "Every tour over the last 14 years is fondly remembered, and quite often defined, by the stories from the road. The people, the accents, the calamities, the laughter, the technical melt-downs and the potholes." Guy continues to say, "The name identifies exactly what happens whilst travelling as a musician. These pieces of ‘raw material’ are spontaneously collected and somehow find their way into songs, on-stage anecdotes and most importantly into my everyday thought patterns. You always carry them with you. Considering the scale of this tour, I know it'll be one to remember with memories to share for years to come". Guy Buttery’s debut album in 2002, "When I Grow Up..." was nominated for ‘Best Instrumental’ and ‘Best Newcomer’ at the South African Music Awards (SAMA’s) making him the youngest nominee in the history of the event. He then went on to win a SAMA in 2010, for his album “Fox Hill Lane” and again in 2014, for his first live concert recording, “Live in KwaZulu”. He has also received other major National accolades including the “The Standard Bank Ovation Award‟ in 2010, 2012 and 2014 for his performances at the National Arts Festival. Guy was then invited to perform with the 52-piece KZN Philharmonic Orchestra, dubbed “Africa’s greatest ensemble” and was also voted “Top Live Show” by The Cape Times. The virtuoso's worldwide scope and recognition rose exponentially with a full international calendar after the release of his award winning album “Fox Hill Lane”. Guy was also invited to perform at the South African Music Awards where he was broadcast to an audience of over 4 million people in one of the country's most viewed television events. Guy then joined world-renowned guitar legends Preston Reed and Jon Gomm for a series of concerts with the touring event, ‘International Guitar Night’. The media cited him “as one of South Africa’s finest exponents of the acoustic guitar.” Expect high dynamics, deep grooves, delicate African inflections and mind-bending guitar playing of an entirely new order from Guy Buttery.
Guy Buttery The Gathering Fiction Tour