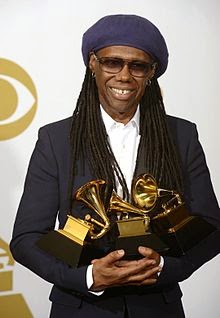 Warner Bros. Records (WBR) announced today that it has signed a global recording contract with Grammy-winning composer, producer, arranger, guitarist Nile Rodgers and his multi-platinum selling band CHIC. In addition, WBR has entered into a deal with Land of The Good Groove, the label formed by Rodgers and veteran music executive Michael Ostin. WBR will handle all distribution and label services for artists signed by Rodgers and Ostin, who will act as the imprint's creative supervisors. "Nile Rodgers' influence on the course of modern music cannot be overstated," said Cameron Strang, Warner Bros. Records Chairman & CEO. "For the past four decades, his visionary work as a songwriter, producer, bandleader, and musician has reverberated across genres and generations. From ground-breaking guitar work, to an uncanny hit making instinct, to shaping the sound of countless artists, he has created a phenomenal musical legacy. Nile has never stopped moving forward, so I am thrilled to welcome him into the WBR family as he begins a dynamic new chapter of his extraordinary career. And I'm doubly thrilled that Michael Ostin will be returning to the WBR fold as Nile's label partner." "My relationship with Warner and Michael formerly started with 'Like A Virgin.' The album is Double-Diamond, just like our friendship is," noted Nile Rodgers. "Nile and I have had a long rich history as creative collaborators and close friends," said Michael Ostin.  "To be partnering with him during this exciting chapter of his career and to be back in Burbank at Warner Brothers, a building that served as my second home since childhood, is an unimaginable dream come true." Rodgers has remained culturally relevant throughout his 40-year-career by constantly traversing new musical terrain and successfully expanding the boundaries of popular music. The co-founder of CHIC, Rodgers pioneered a musical language that generated chart-topping pop hits like "Le Freak" and "I Want Your Love," sparked the advent of hip-hop with "Good Times," and gave Sister Sledge the smash "We Are Family." His work in the CHIC Organization and his productions for artists like David Bowie and Madonna have sold over 200 million albums and 50 million singles worldwide, while his innovative, trendsetting collaborations with Daft Punk, Avicii, Disclosure, and Sam Smith reflect the vanguard of contemporary music. Fueling four decades of pop anthems with more than 200 production credits to his name, the scope of Rodgers' peerless influence is undeniable. Rodgers reflected on his extraordinary life and career in his 2011 self-penned autobiography Le Freak: An Upside Down Story of Family, Disco and Destiny, which Rolling Stone chose as one of its "23 Greatest Rock Memoirs of All Time." Rodgers' signing with WBR represents a sort of homecoming for the icon and innovator. He released the album CHIC-ism on Warner Bros. Records in 1992 after reforming the group with Bernard Edwards. It is also a return for Michael Ostin, who, from 1988 to 1996, served as WBR's Senior Vice President, overseeing the day-to-day U.S. operations of the creative department as well as creative coordination of the careers of such artists as Madonna, Prince, Eric Clapton, Paul Simon, Van Halen, B-52s, Talking Heads, R.E.M., and Seal. On 3 February  "Le Freak" will be inducted into the 2015 Grammy Hall of Fame and Rodgers will receive the President's Merit Award during the Recording Academy's 8th Annual Grammy Week Celebration for the Producers & Engineers Wing of NARAS. He'll also appear on the new PBT series Speakeasy for a 60-minute interview with Valerie Simpson. Rodgers is currently finalizing the first new CHIC album in nearly 25 years, with the first single scheduled to drop on March 20th, followed by the album in June.