Madonna blows the Grammy Awards 2015 away 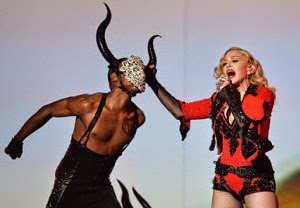 So I sat up from 03:00 this morning (South African time) to watch the Grammy Awards 2015. And not to watch the full show, but only to see one of my favourite pop icons performing - Madonna. And let me say it was hot, funky and just brilliant piece of pop/dance. She performed the song Living For Love, her new singe, and what a show. Very much to her music of the video of the same name, the video was filled with bull-horned men and Madonna dressed as a matador. Basically Madonna is doing what she does best - giving an awesome performance. There were a lot of booty shaking and funky dance routines. The crowd was up on their feet clapping and dancing away. So here's hoping the Madge will include South Africa on her next tour...