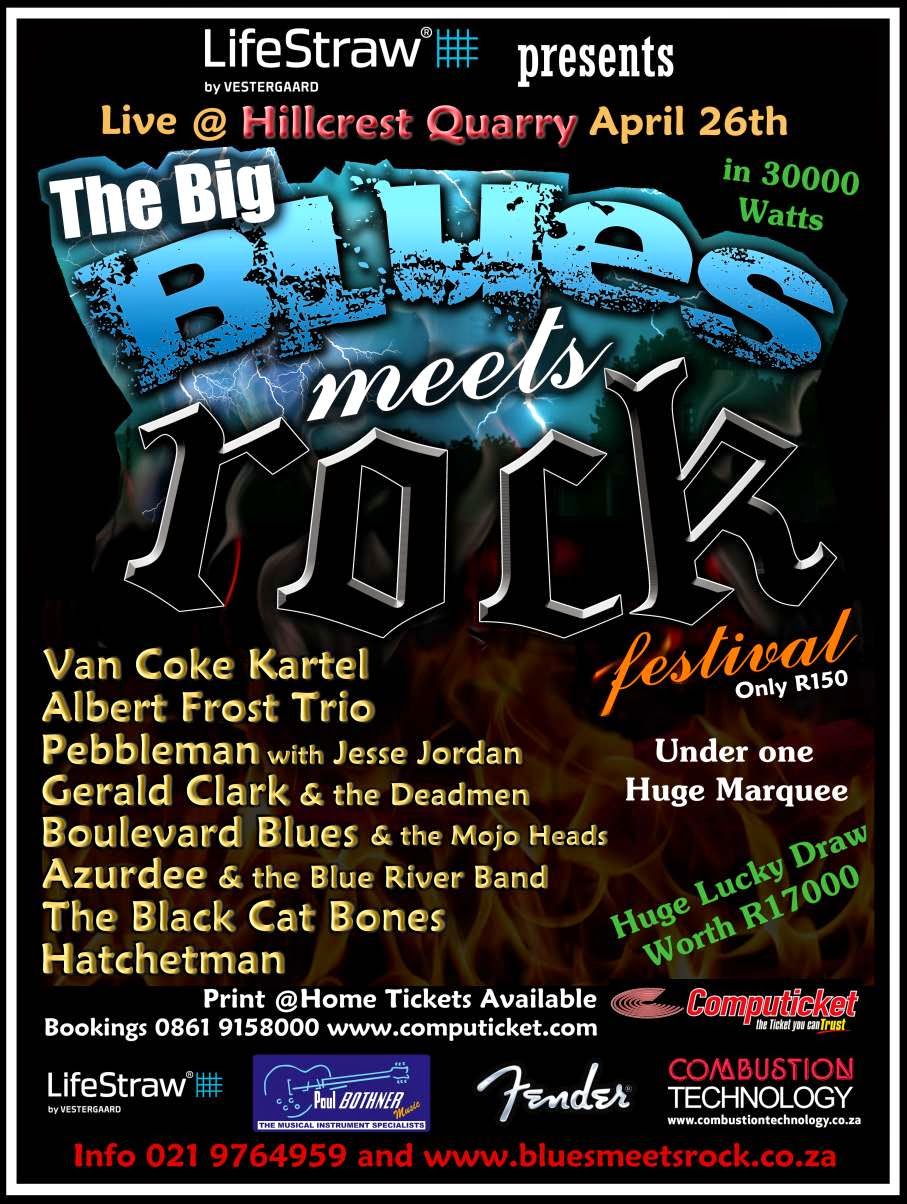 Hold on tight when 'Blues meets Rock' in a head on collision at HILLCREST QUARRY in Durbanville on Sunday 26 April. If you are a solid Rocker, dreamy Blues bloke, or a bit of both, make sure to join us for a Blues Rock Sunday to live it up all you like as the Monday after is a public holiday! 9 Bands and 14 Artists in 30000 watts under one huge Marquee are guaranteed to give you the Blues Rock Fix you deserve. Food Stalls, Family Entertainment and Blues Rocking Goodness will be yours for 10 hours straight.And don't forgot the added mojo of a Massive Lucky Draw worth over R17000. Tickets: R150.00 at Computicket 0861 9158000

Organizer Richard Pryor comments on the bands that will be performing: 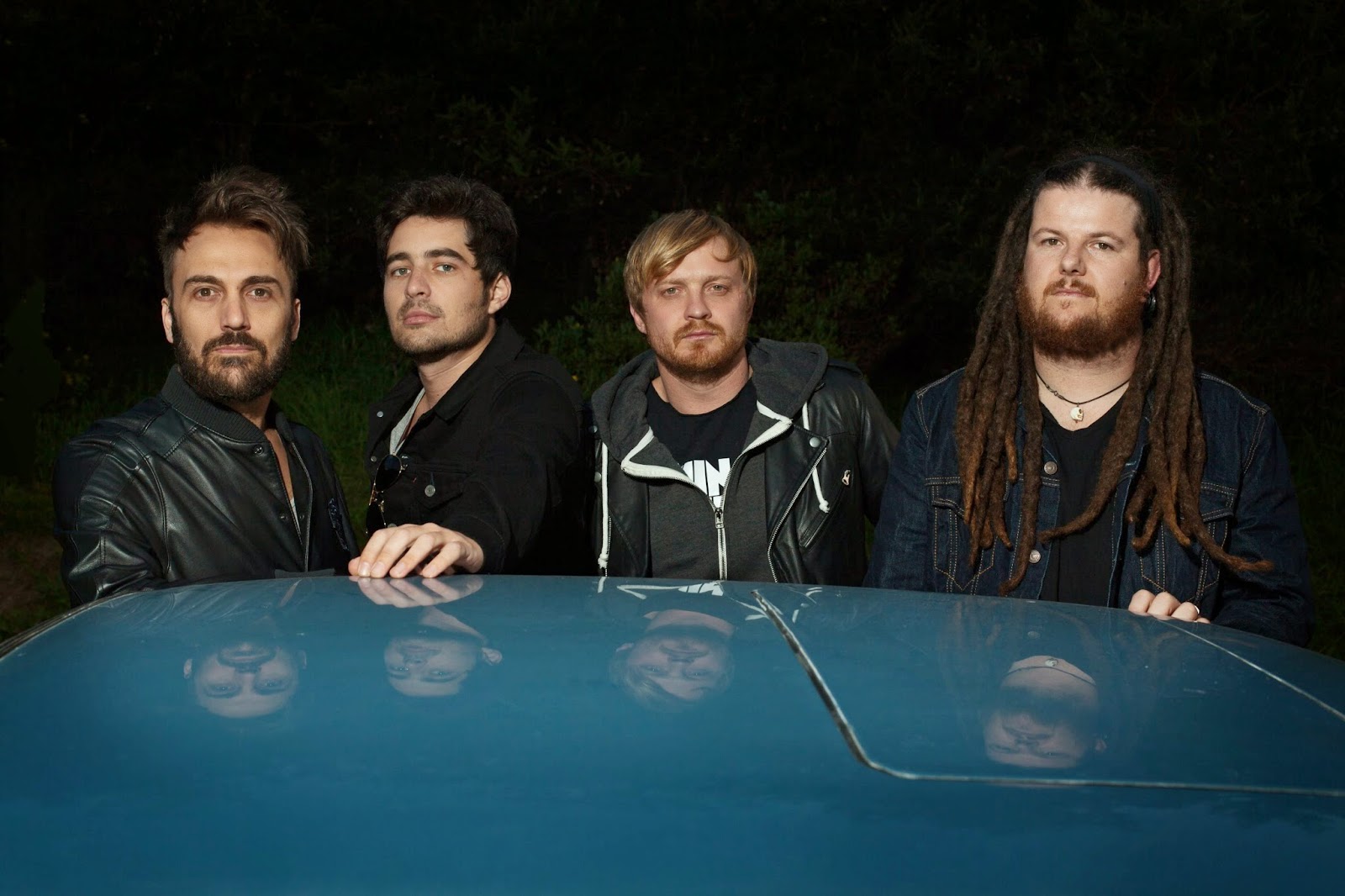 Van Coke Kartel
This Rock Quartet are a high energy, no nonsense Rock n Roll show. An Evolution of Fokofpolisiekar, these guys play hard and they play Loud and they will be headlining the Big Blues meets Rock Festival this year. Don't miss one of the top bands in the country delivering a high octane rock extravaganza!

Black Cat Bones
They are Modern-day storytellers, representing life through music in its most honest form. Their collective influences fused together in an audio diary made up of traditional as well as modern Blues, Rock, Metal and Country-inspired music. They know how to Rock a Big stage and were awarded the prestigious MK 'Best Live Act' Award. With a new Album coming out these guys are gonna be on fire. Watch them at your own Risk!

Pebbleman with Jesse Jordan.
This is pure 70's hard rock with a modern Progressive twist, a high dose of musical instrumentation and a good smattering of smoky Blues sauce to round off this delicious original rock recipe. These Guys have some awesome Musical skills individually but when they put it all together with Pebbleman, it comes at you like a Rock Tsunami. With an international record deal under their belt and 2 killer albums you better make sure you can handle the Shake when they land on the Big stage. Albert Frost Trio
Albert with his Blues Trio must be one of the most entertaining and awesome blues outfits this country has ever seen. He's played every Nook and Cranny, including all 20 Oppikoppi festivals and much more. It's a musical thrill listening to Albert weave his mojo story as he takes you through some reworked standards and some killer originals. Watch one of the top guitarists in the country strut the Blues Stuff while the Trio sits in the pocket and lays it down.

Gerald Clark & the Deadmen
Gerald Clark can entertain for days just on his own, with an acoustic guitar. But when he teams up with the Deadmen everything comes alive in 50 shades of Blue and something really special unfolds. After he puts the Meat and Potatoes in the Blues pot, The Deadmen put the lid on it and now it's up to me and you to come watch it cook. His new material and a brand new Album will add huge flavour to this Blues potjie.

Boulevard Blues & the Mojo Heads
Experienced, well-oiled and a unit of international quality. They have been busy entertaining fans and spreading the Blues Gospel for 16 years now. With the eternal 'Doctor of the Blues' Doc John on Vocals and the Fender Endorsed Richard Pryor on guitar, they will take take you on a Blues Rock Journey of Note. It's a one way ticket and you ain’t coming back.  Joined by the Mojo Heads this year it's gonna be a set of incredible power and diversity, so stand back and let the Mojo overcome you.

Azurdee & The Blue River Band
Based in Pretoria these guys travel south with a Brand new album release in hand. They deliver the Country Blues with fired up cowboy boots and a double 'YEEHAW'!!! Lead singer Azurdee is originally from Kentucky and she is showing SA how to make music midwest style.The Band is preparing for an American tour in 2015 but before they go they want to tell you all about it at the Big Blues meets Rock Fest.

Hatchetman
These guys will open up the Festival. A wonderful and incredibly talented 3 piece acoustic folk rock outfit with vocal harmonies that will resonate long after the show. Johnathan Tait leads the vocals with more than a nod to Neil Young while the others take turns to sing the sweet melody.Cajon, Guitar, Bass and 3 part harmonies will turn your ear wax to sweet folk rock Honey