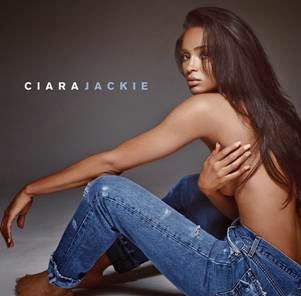 Ciara’s sixth full-length album, JACKIE, arrives in stores today. Hot on the heels of her self-titled 2013 chart-topper, Ciara, which debuted at #2 on the Billboard Top 200, brings the heat again over the course of Jackie’s 16 track Deluxe Edition.  Whether it’s the swagged-out intro “Jackie (B.M.F.)” or the bouncy banger “That’s How I’m Feelin’” [Feat. Pitbull & Missy Elliott], each song carries an effusive energy of its own. “Lullaby” shows another side of this dynamic performer, while the scorching first single “I Bet” continues gaining steam. The next single “Dance Like We’re Making Love” once again reaffirms her as “Queen of Dance,” with its sexy groove and infectious refrain emblematic of her range. Ciara attracted the talents of producers including Dr. Luke, Polow da Don, Harmony Samuels, The Underdogs (Damon Thomas & Harvey Mason, Jr.), and co-writers Rock City, Ester Dean and hit maker Diane Warren. Ciara joins the cast of NBC’s brand new variety show, I Can Do That, premiering Tuesday May 26. Alongside five other celeb competitors and host Marlon Wayans, she’ll showcase a new talent that she didn’t even realize she had and completing numerous inventive challenges.
Ciara JACKIE Missy Elliott Pitbull