All hail 'President' Karen Zoid who makes history on iTunes! 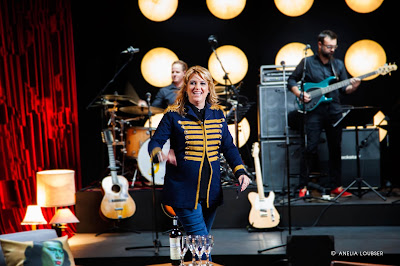 Since the second series of Republiek van Zoid Afrika kicked off on Thursday 2 July, “president” Karen Zoid has reached the weekly no 1 download on SA iTunes for the past three weeks with songs that were performed with her guests on the show. The first chart topper was Karen Zoid and Jack Parow`s live performance of “Cooler as Ekke”; week two saw her duet “Lose when you Lie” with Steve Hofmeyr take the no 1 spot and last week her “Hillbrow” collaboration with Bobby van Jaarsveld also reached no 1, making Karen Zoid the first South Africa artist to top the Top40 SA with iTunes chart on KFM and 947 for three weeks in a row with three different songs.

Top40 SA presenter, Rob Vember says: “The Top40 SA with iTunes gives listeners the opportunity to decide the chart position of their favourite songs by downloading them from iTunes both before and during the live show. The fans have spoken loud and clear with Karen Zoid remaining top of the chart for three weeks in a row with three different songs – a first for any artist on the chart! A huge congratulations to Karen on this achievement and a big thank you to everyone for supporting our home-grown talent!”

Karen Zoid says that she is grateful to be in a position where she can connect artists with an audience through her TV show. “I am blown away by the support from the public. As all my fellow artists know, we have to consistently work for years and only some of us are lucky enough to EVENTUALLY come up with a hit song on radio or on the song charts. So to have had 3 songs, over the past 3 weeks is just crazy! I love collaborating with fellow musicians and I enjoy making music with a different artist every week on Republiek Van Zoid Afrika. The music industry is changing globally and it is great to know that people in SA are willing to spend R9.99 on a track. As long as fans support the artists by buying their music, attending their shows and sharing their news, the music plays on.”

Republiek van Zoid Afrika, Karen`s talk show on kykNET airs on Thursdays at 20h30. Every week two South African icons or celebrities are featured as guests on the show. Karen`s engaging questions and great sense of humor has made the show an instant hit when first broadcast in 2014. The fact that she also knows most of her guests very well gives an intimate and spontaneous feel to the conversations. Towards the end of the show, each guest also receives an appointment as a particular minister in the Republic of Zoid Afrika. Last week`s show featured Marc Lottering and Bobby van Jaarsveld. Marc Lottering was appointed Minister of Laughter. Because Bobby van Jaarsveld sister Karlien van Jaarsveld is already Minister of Pop, Bobby received a special accolade and was crowned as ‘Meneer Republiek van Zoid Afrika.’ The show ends with a live performance and from there fans can immediately download these songs.