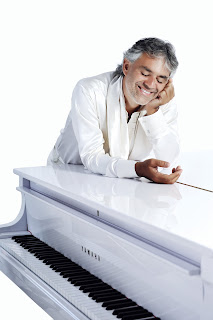 Renowned Italian tenor Andrea Bocelli is the most successful classical solo artist ever and one of the best-selling performers in any genre, having sold more than 80 million albums worldwide of both his classical and pop albums. The 13 titles that form his incredible ‘pop’ catalogue, recently remastered with attention to every detail, to ensure the highest sonic quality, will be released in a box set with faithfully replicated original artwork, including the original booklets. The 3 bonus discs are a collection of rare tracks that have not been available internationally, and only available as bonus tracks on local versions of certain albums. The collection from Sugar Music / UMe will be available both as individual albums and within the expansive and lavish box set which includes all 13 albums, ranging from 1994’s Il Mare Calmo Della Sera to 2013’s Passione and the live Love in Portofino. This is to be the first time Il Mare Calmo Della Sera has been available in many territories. The bonus discs contain two highly sought after and rare tracks, ‘Quando Mi Innamoro,’ the original version of ‘Cuando Me Enamoro’ and ‘Solo Piu’ Che Mai,’ the Italian version of Sinatra’s ‘Strangers In The Night.’
Andrea Bocelli