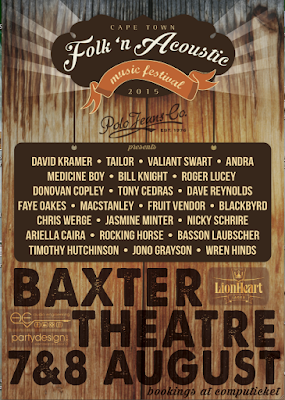 With a few days to go tickets are going fast for the Cape Town Folk `n Acoustic Music Festival 2015 presented by Real Wired Music and Polo Jeans Company. On the 7th and 8th August 2015, an array of top South African artists will perform completely acoustically in an intimate, concert-style setting.

Real Wired Music has just announced that BlackByrd has now also joined the stellar line up on both the event nights. BlackByrd is well known for their innovative combination of pop, country and ballads. Their debut album “Strong” took SA by storm with 5 number 1 hit singles and reached gold status.  Their second album “Home” delivered two more no 1 singles and the group has also had an impressive 7 SAMA nominations over the past few years. They were also nominated for a SAMRO Wawela Music Award 2015.

Organiser Gavin Minter from Real Wired Music says: “Over the last 7 Folk n Acoustic events we have showcased 118 artists and bands, involving approximately 150 musicians. For this next concert we have decided to not repeat any of the artists from the past 7 concerts. We want to keep it fresh! We are honoured to have David Kramer on the line up. We are also excited about having new talented artists like Fruit Vendor and Chris Werge sharing a stage with legends like Valiant Swart, Tony Cedras and Roger Lucey.”

Take - Folk, Bluegrass, Celtic Music, Cape Jazz and a Swamp of Blues… then throw in a few guitars, a piano, violin, banjo, ukulele, cello, piano accordion, steel pan, blues harp and voices from the heavens - all played by some of South Africa’s finest in these genres – and you have the Cape Town Folk n Acoustic Music Festival.