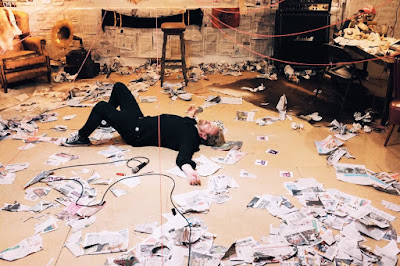 During FRANCOIS VAN COKE’s successful mini tour to Europe in June, he found the time to shoot his next solo music video with his long-time friend, Johan J. Nel in Amsterdam.  Johan produced several of Fokofpolisiekar’s music videos. The video is a retrospective look at Francois’ carreer over the last twelve years and what led him to become who he is today.  Behoort aan niemand nie (Belong to no one) is also his declaration of independence. Following the runaway success of his first music video, Toe Vind Ek Jou with Karen Zoid, Francois is proud to present the second music video from his debut self-titled solo album: Behoort aan niemand nie. This opening track of the album kicks off with spooky vocals and distorted bass guitar.  The verse moves in rhythm to rock ‘n roll of the 80’s.  The chorus ‘Staan terug vir niemand nie, behoort aan niemand nie’ (‘Stand back for no one, belong to no one’) is a mission statement for the future exposed with straightforward acoustic guitar and piano.  Jedd Kossew plays a fantastic melodic solo, underscored with industrial and electronic sounds close to the end.

NB! Francois’ APP for iPhone and Android is available for free from your phone’s AppStore.