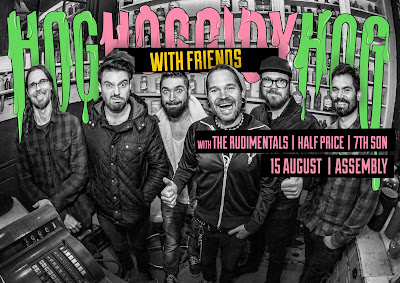 Hog Hoggidy Hog and special rock friends commemorate the late George Bacon. The spirit of their 20 year pork rock legacy lives on at the Hog’s Birthday Bash next month. On the 15th of August, exactly twenty years ago to the day, Hog Hoggidy Hog played their first gig at the Purple Turtle in Cape Town. On the 15th of August 2015, come and celebrate the 20th birthday of Hog Hoggidy Hog, who will be partying with some special friends they have met along the way. Featuring 7th Son, Half Price, The Rudimentals and Hog Hoggidy Hog, let's blow out some candles and celebrate #PorkRock. Hog Hoggidy Hog, one of the iconoclastic legends of the South African music scene will be turning 20 years old on the 15th of August. They have invited some of their closest friends in a celebration of 20 years of #PorkRock. This event will feature some of South Africa's finest in the scene and will serve to kick-start some exciting projects on the horizon for 2015. All the participating musicians will be donating their time and skill towards raising money in a preview of what is to come. More information to be released over the coming months, but for now, come and celebrate 20 years of #PorkRock.

Line up: 7th Son, Half Price, The Rudimentals and Hog Hoggidy Hog with Friends.