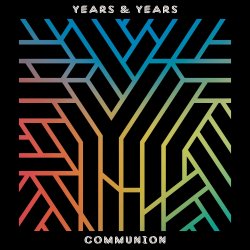 With their luminous brand of electro-pop, London-based trio Years & Years layer sweetly smooth vocals over bright and heady beats to create what they call “music you can dance and cry to.” As winners of the BBC Sound of 2015 Poll (an honour previously granted to such critically praised hit makers as Sam Smith, Adele, and Ellie Goulding), bassist Mikey Goldsworthy, keyboard player Emre Turkmen, and vocalist Olly Alexander have spent the last few years charming audiences worldwide by merging R&B, deep house, and classic-pop with both elegance and abandon. Years & Years are now poised to take that early promise and breakthrough with the release of their highly anticipated full-length debut album, Communion. Released on Polydor Records this July, Communion features recent #1 single ‘King’ — a gorgeously synth-washed track that reveals the raw yet lovely emotional power of the band’s gracefully crafted sound. To achieve that sound, Years & Years recorded and self-produced Communion in London with the help of collaborators like Mark Ralph (the producer/engineer behind Hot Chip and Hot Natured), matching an inventiveness inspired by such artists as Flying Lotus and Radiohead with a daringly confessional lyrical sensibility. The album was mixed on three different desks, each with their own distinct history – Conny Planks’, Tony Visconti’s and with final touches all mixed on the desk Dr. Dre recorded ‘2001’ on.
Adele and Ellie Goulding Sam Smith Years & Years