EXCLUSIVE! Jack Parow has been knocked around in the boxing ring and he tells us about his new music, his thoughts on same sex marriages, Caitlyn Jenner and local YouTube star Suzelle (DIY) 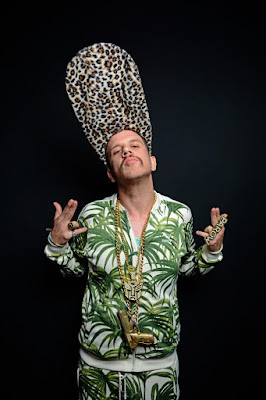 Where art thou now Jack Parow?

I'm actually sitting in a flat in Amsterdam. I'm on tour in the Netherlands for a few festivals. It's been crazy!

I've heard you've been traveling, so tell us where you were and the experience you had overseas?
In the last while I've been in Dubai, London, Belgium & The Netherlands. Its been MINDBLOWING. Sold out shows all over and headlining slots at some major festivals like Zwarte Cross and Solar Festival. Really been insane and just making me even prouder to be a South African and to spread the good vibes to the world and keep our names high.

What do you think is it about your music that appeals to overseas crowds & markets?
I think its just something new and different and something people haven't seen before. So even if they cant understand the words they can still feel the music. We also put a LOT of effort into our live show and make sure its high energy and as entertaining as possible. I feel a lot of bands forget that the music is obviously the most important but the people come to see a show so it's just as important to deliver something that entertains them and blows their fkn minds.

Any new music in the pipeline or a new album?
I just released a new single with Riky Rick called Never Gonna Grow Up and also been collaborating with some artists while I have been here in the overseas so all of this is building up to a album sometime next year...if all goes to plan...touch wood.

You touring in September with Dirty Nasty. How did you guys meet and what element does he bring to your music?
We met him when I was in L.A for a show. He contacted my manager and asked if he could meet me. I've been a fan of his for long and love his stuff as well as the stuff he did with people like Mickey Avalon, Riff Raff and Andy Milanokas. So ja, we became chommies and then we made some music together and it came out fkn cool so now I'm bringing him down for a lekker little tour in SA to show him where the best things in the world happen.

Your debut album is now being released on a silver pressed vinyl to commemorate the CD's platinum status. You must be chuffed. So do you think vinyl is making a comeback or is it only a fad?
I don't think it’s really a comeback, vinyl has always been around and always been a part of especially Hip Hop music, but you know how it is, fad or not, its still a cool way to listen to music and its still a cool sound, so some people might be doing it for the reason of it being a bit f a fad, but I think there is still a massive market that buys it just for the reason of it being a cool way to listen too and collect music.

Your most bizarre live performances ever were...
Jeez, I've had many. From weird little places where I barely did any songs and I think they just booked me to meet me and I ended up just drinking with the people, to getting thrown of stages in New Castle and Ford corporate events. Its been a long time and their has been some insane times...might tell more one day...but it could be detrimental to my health.

Are you a fan of Rocky Balboa?
Who isn't! The peoples champ...eye of the tiger...running up those stairs...knocking out Dolph Lundgren...what a man!

I read you had weekly boxing training for the  Reach For A Dream charity celebrity boxing match which took place on 4 July. Tell me more about this event?
Yeah man, it was so cool. I started boxing a few months ago. Has been really amazing! My trainers, Bruce and Adam have really been amazing and its just been the funnest vibe. I always joke and say that before I did this the only person I've ever hit was Leon Schuster...but it's not even a joke...its true!!

Did you get a punch-up or was the other guy worse off?
I definitely took a few good knocks and had a blue eye to prove it...but I won...so that should answer your question my bru.

What charities are close to your heart?
I have a few. I'm doing some stuff with Harley this year for breast cancer. Then I'm also part of Tekkie Tax and the money raised by me went to varies charities that care for dogs. I have a a few other like Onesight as well that supplies reading glasses to people who can't afford them and then the charity that I've been working with the longest is Movember, for the obvious reason being that I was born with a mustache but its also close to my heart seeing as my dad suffered and passed away from testicular cancer.

In the world there is now this big debate about same sex marriages, what are your thoughts on this subject?
I doing really care, I feel its different strokes for different folks and as long as you aren't marrying your sister or something strange like that it should be your own choice and you should be allowed to live life the way you choose to. I am get a LOT of hate and mud thrown at me buy the more conservative population, so I know how it feels to get attacked for who you are and what you believe in and its not fun. But it blows over and then everyone forgets why they were mad in the first place